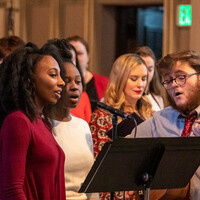 The tradition of Lessons and Carols has a rich history, though its roots have been clouded in speculation (some sources suggest that it was instituted to keep people out of the pubs on Christmas Eve!). We do know that it began in England in the latter half of the 19th century and that its format was quickly adopted by a variety of Christian denominations to set the tone spiritually for Christmas. While the specific arrangement may vary among different cultural traditions, most customs use biblical readings and choral music to tell the story of humankind: the creation, the fall, the promise of the Messiah, and the birth of Jesus.

I use this for everything. i can play many games. i can also watch netflix, youtube, and look stuff up. It’s very easy to use once you get used to it. It’s worth every penny and i would definitely recommend it
ttps://www.sayweee.com/event/view/x7umi